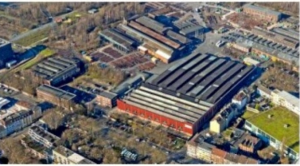 Normally, rolling, forging and hardening are carried out in the factory floor of the Bochumer Verein Verkehrstechnik (BVV). For some time now, however, construction, hammering and carpentry have also been taking place on the extensive industrial site on Alleestraße (Bochum, Germany). The long-standing company is modernizing.

A new logistics hall is going to be ready by the middle of the year.

Most noticeable is the construction work in the centre of the plant site. An old shelter will be converted into a logistics hall. The company is lagging a bit behind with the rebuild, especially due to supply bottlenecks for construction materials. “But by the middle of the year, the logistics hall will be ready,” says BVV CEO Stefan Hölzl.

Then the hall on the east side of the site will also be cleared, where the contracted logistics company still handles the delivery and removal of materials and products. After a land swap with the city of Bochum, BVV is moving out . An industrial park for small to medium-sized companies is to be created there. To this end, more than 40 industrial buildings with a total size of 158,000 square meters must be demolished.

It’s also about renewal at BVV, which will celebrate its 180th birthday this year. “Except for the logistics annex, though, you won’t see that much of it from the outside,” Hölzl said. The 57-year-old, who has been the face of the company for the past year, is pushing ahead with modernization. This includes a new paint shop- at a cost of more than one million euros.

Another project is at the moment still a pipe dream for the time being: the railway siding. Also because of the access to the tracks at the rear of the plant, BVV has completed the land swap with the city. Now it is holding talks with Deutsche Bahn, which owns the tracks.

Compliments from Poland for our monobloc wheels

Your Product ID, being the batch number, assembly number or the wheelset number, can be found on the cover sheet of your delivery note.

You can find out more about which cookies we are using or switch them off in settings.

This website uses cookies so that we can provide you with the best user experience possible. Cookie information is stored in your browser and performs functions such as recognising you when you return to our website and helping our team to understand which sections of the website you find most interesting and useful.

Strictly Necessary Cookie should be enabled at all times so that we can save your preferences for cookie settings.

If you disable this cookie, we will not be able to save your preferences. This means that every time you visit this website you will need to enable or disable cookies again.